Occasionally we are lucky enough to have someone find us, even though most of the time I feel like we are located at the end of the world.  Such was the case a month or so back when Kirk Mills walked in with the gentleman who was doing the interior design work for his home on the island.  Since I know so little about the field of interior design the name Carleton Varney didn't resonate with me until I started to do some research.  I discovered he was the owner of the famed Dorothy Draper and Company design firm of New York City, and is actually one of America's best known interior designers.  Imagine my chagrin when I again thought of him looking over our haphazard placement of books and hodgepodge selection of furniture and fixtures.

Mr Varney had mentioned he had released a new book recently and indicated he would be willing to do a book signing at the store when he returned for the final installation at Kirk's home.  Time passed and I forgot about it.  So, imagine my surprise when I received a call from Mr. Varney himself offering to make arrangements for a signing and reception on the evening of the 17th of January.

So I am happy to announce that we will be having Carleton Varney at Paragraphs for a book-signing and reception on January 17 from 6 to 8pm. 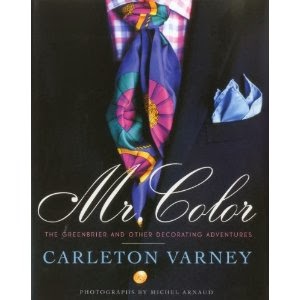 Carleton Varney is the president/owner of Dorothy Draper & Co. Inc., located in New York City. It is one of the oldest established interior design firms in the United States and is named after the founder of the company, Dorothy Draper, a doyenne of interior design in the United States from the 1920's to the 1960's. The Varney design philosophy stresses…"the use of bright colors and the rejection of all that is impractical, uncomfortable and drab". In embracing this practice, he continues the tradition of Dorothy Draper, by being associated with the adventurous use of vibrant colors, floral patterns and bold contrasts. In addition to the decoration of numerous private residences, the company has also been associated with the decoration of cruise ship and private plane interiors. Carleton Varney was the curator of the former presidential yacht, the USS "Sequoia". In 2008 he also designed the Architectural Digest Green Room for the Academy Awards celebration at the Kodak Theatre, in Los Angeles.

Mr. Varney's versatility in design can be seen in the wide range of products that bear his mark, ranging from dinnerware, crystal, scarves, and he has designed a line of furniture for the Romweber and Kindel Furniture companies as well as for Ficks Reed. His fabric designs, launched under the names Carleton V Ltd. (New York) and Carleton Varney by the yard (Palm Beach, Florida) grace the rooms of some of America's most beautiful resorts and homes. He also appears regularly on the HSN television program “Live Vividly - Carleton Varney” featuring home décor items of his designs.

A native son of Lynn, Massachusetts, he was educated at Oberlin College, Ohio, where he obtained his Bachelors of Arts degree - and the University of Madrid, Spain. He obtained his Master of Arts degree at New York University. He also holds an honorary doctorate from the University of Charleston, West Virginia, and founded the Carleton Varney School of Art & Design in that institution. Architectural Digest, in its January 2005 edition, named him as one of the 30 “Deans of American Design”.

Unfortunately our signing with Carleton Varney will be delayed to a date which we will announce. Probably 2 weeks but we will need to see when he reschedules.