December 4 - Take your child to a Bookstore

To Ban or not to Ban? 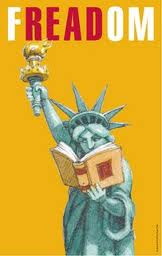 An angry response and demand for a boycott spread rapidly yesterday when a new self-published Kindle book, The Pedophile's Guide to Love and Pleasure by Phillip Greaves, was offered for sale at Amazon.com.

Amid the hullabaloo and the call for Amazon to remove the book from its site, I thought this quote from the Reading Copy book blog at Abe books would be appropriate. The blog referenced the verse in a post discussing the 50th anniversary of the 1960 not-guilty verdict in the British obscenity trial over Lady Chatterley's Lover.

Let’s remember some words from a glorious librarian, Philip Larkin:

Sexual intercourse began
In nineteen sixty-three
(which was rather late for me).
Between the end of the
“Chatterley” ban and
The Beatles’ first LP.

As long as the material is not violating any laws than we should always error on the side of allowing it to exist, no matter how objectionable or disgusting we may find it to be. The alternative is to enter the slippery slope of censorship and the ability for books to be banned simply on the sensibilities of the majority, or even worse a vocal minority.

However, I do admire the honesty of the blogger mentioned below who admitted how easy it is to get swept up in the moment when faced with such objectionable material. From Shelf Awareness:

In a post titled "Crossing a Line: Is Banning Books Ever OK?" a Book Smugglers blogger observed: "My first reaction was that of revulsion and I not only RT the link with a 'I have no words' attached to it, I also wrote and I admit it, without thinking about what I was saying: Seriously @Amazon? YOU NEED TO REMOVE THIS FROM YOUR SITE. Which is of course an attempt at book banning. Needless to say, madness ensued and we got hundreds of @ replies who shared the feelings of disgust and who retweeted the request to pull the book off Amazon.

"There were also quite a few replies who questioned the request on the grounds that censorship should never be encouraged even if the content of a book is disgusting and reprehensible. The ensuing conversation was not only interesting but also eye opening. Because I have always, always seen myself as someone who would never EVER condone book banning or censorship on any grounds, there I was facing a very uncomfortable truth about myself: a line I never ever thought I would cross and yet I did, in a heartbeat."

Amazon has the right under the First Amendment to sell any book that is not child pornography or legally obscene. Greaves' book doesn't amount to either because it does not include illustrations.