I love browsing through the Chronicle Books catalogs. They publish so many fun and interesting titles and this is just one example.


"F" stands for "funny" in this perfect gift for students or anyone who has ever had to struggle through a test and needs a good laugh. Celebrating the creative side of failure in a way we can all relate to, F in Exams gathers the most hilarious and inventive test answers provided by students who, faced with a question they have no hope of getting right, decide to have a little fun instead. Whether in science, the humanities, math, or other subjects, these 250 entries prove that while everyone enjoys the spectacle of failure, it's even sweeter to see a FAIL turn into a WIN.


Biology:
Question: Adam cuts his arm. Blood gushes out and is red in color. What does this show?
Answer:  He is not a robot, he is a real boy.
Question: What is a fibula?
Answer: A little white lie.

I could provide more favorites but you need to pick up a copy of the book and read it for yourself.

Come into the store or buy online here

or read on your preferred device as a Blio Ebook

Irresistible . . . A cross between a high-concept picture book and an iPhone, only more charming.-- The Wall Street Journal 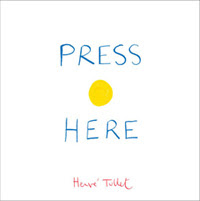 It's not magic . . . It's the power of your imagination! PRESS HERE. That's right. Just press the yellow dot and turn the page. Follow the instructions and embark upon a magical journey! Each page of this surprising, irresistible book instructs the reader to press the dots, shake the pages, tilt them, and even blow on them—who knows what will happen next! Read-aloud fun for all ages!

It's 1952 and the Scott family has just moved from Los Angeles to London. Here, fourteen-year-old Janie meets a mysterious apothecary and his son, Benjamin Burrows - a fascinating boy who's not afraid to stand up to authority and dreams of becoming a spy. When Benjamin's father is kidnapped, Janie and Benjamin must uncover the secrets of the apothecary's sacred book, the Pharmacopoeia, in order to find him, all while keeping it out of the hands of their enemies - Russian spies in possession of nuclear weapons. Discovering and testing potions they never believed could exist, Janie and Benjamin embark on a dangerous race to save the apothecary and prevent impending disaster.

This is a book that will not only appeal to the middle school reader but has enough historical significance, dealing with Cold War politics and McCarthyism, and even a little bit of romance which should appeal to the teen reader.  There is an excellent review at the School Library Journal by Elizabeth Bird, Collection Specialist for the New York Public Library's Youth Collection,

Maile Melroy is not a newcomer to literary awards or industry recognition of her talent. So it should come as no surprise that "Apothecary" has been selected as one of the YALSA titles for 2012.

Maile Meloy was born in Helena, Montana, in 1972. Her short stories have been published in The New Yorker and The Paris Review. Her first story collection, Half in Love, received the Rosenthal Foundation Award from the American Academy of Arts and Letters , the John C. Zacharis Award from Ploughshares, and the PEN/Malamud Award. Her first novel, Liars and Saints, was shortlisted for England’s 2005 Orange Prize. Both books were New York Times Notable Books. She has also received The Paris Review’s Aga Khan Prize for Fiction and a Guggenheim Fellowship. She lives in California.

Apothecary is available at Paragraphs or can be purchased online in Hardcover,  Unabridged Audio Book on CD

Also available as a Blio ebook

Or as a Google ebook
No comments: