Paragraphs On Padre is hosting a writer’s workshop/critique group on the first Saturday of the month--but due to the craziness of Labor Day, the September meeting will be held the second Saturday. Our next workshop will be led by Kathy Trenfield Raines a founding member of the group.

We welcome all writers at all different skill levels, but this is an adults-only writing group (mature young adults, 14 and above, with a parent present, may be allowed--but use discretion as we will tackle adult topics, mature discussions, and difficult subjects from time to time). Here is a chance to meet other writers, improve your writing skills, discuss publishing, editorial advice, and critiquing but most of all interacting with other writers.

The session will be two hours long. Bring a pencil and paper and your active imagination.

El Rinche is a reimagining and flip of the script of an American popular culture icon. This novel tells the story a light-skinned Mexican American named Ascencion “Chonnie” Ruiz de Plata. He disguises himself as the ghost of a Texas Ranger on the South Texas border of Mexico now known as The Rio Grande Valley between 1905-1921. Together with his partner, the Native American Tal’dos, a Japanese ninja master, and the most successful U.S. Marshall of all time, Bass Reeves (the real lone ranger), Chonnie takes on the superhero persona of “El Rinche” to fight the villainous Texas Rangers and save the local peoples of the area. 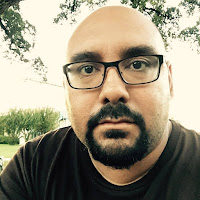 Dr. Christopher Carmona is an Assistant Professor of Mexican American Studies and Creative Writing at the University of Texas Rio Grande Valley. He is a member of the Ad Hoc Committee for the TX State Board of Education for Mexican American Studies. Currently, he serves as the Chair of the NACCS Tejas Foco Committee on Implementing MAS in PreK-12 Education in Texas. His short story collection, The Road to Llorona Park, is listed by NBCNews as one of the 8 Great Latino Books published in 2016. Carmona was the winner of the NACCS Tejas Award for Best Fiction Book of 2016 for The Road to Llorona Park.  He serves on Responsible Ethnic Studies Textbook committee that was awarded the "float like a butterfly, sting like a bee" award for excellence in educational leadership f from the Mexican American School Board Association (MASBA). He has published three books of poetry, co-edited two anthologies, and co-authored a scholarly conversation book, called Nuev@s Voces Poeticas: A Conversation about new Chican@ Identities. Currently, he is working on a series of YA novellas reimagining the “Lone Ranger” story as a Chicanx superhero fighting Texas Rangers in the Rio Grande Valley from 1905-1920 entitled El Rinche: The Ghost Ranger of the Rio Grande. Book One is out in bookstores now.