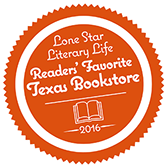 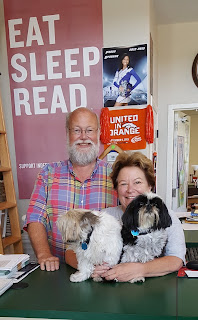 Over the past few months the online Texas book site Lone Star Literary Life conducted a poll of readers across the state to determine their favorite ten bookstores in Texas.  Thanks to our many friends and neighbors Paragraphs is proud to have been selected as #3. This is quite an honor for us and we so appreciate all who took the time to vote or send emails in support of Paragraphs.

As you travel the state take the time to stop in and visit these other great community bookshops. You can learn more about them at this link.:

And I recommend you subscribe to the online newsletter Lone Star Literary Life to keep up-to-date on all the bookish news across the state.
No comments:

On the Shelf at Paragraphs - "All The Light You Cannot See"


Ten years in the writing, Anthony Doerr’s "All the Light We Cannot See" is an epic work of historical fiction. Originally released in May, 2014, this beautifully written novel was awarded the 2015 Pulitzer Prize for fiction, received great reviews, and was a favorite with booksellers. This is not a new book but if you haven’t read it make sure you place this title on your to be read list. The trade paperback is scheduled to be released in October, 2016. With richly detailed language and characters who are both brave and heartbreaking, Doerr weaves together the stories of a French girl named Marie-Laure who has lost her eyesight and a German orphan named Werner. As Hitler’s occupied territory grows, Marie-Laure and Werner’s lives intersect even as their families are torn apart, yet this gorgeous novel is the story of people who, against the odds, find good in one another.
The book opens one month after the Allied invasion of Normandy, as U.S. airplanes drop leaflets urging the inhabitants of Saint-Malo to evacuate the town immediately. Marie-Laure, huddles on an upper floor of an ancient house, struggling in her blindness to make sense of the events going on around her. Five streets to the north, 18-year-old Private Werner is bivouacked in an old hotel, scrambling to take cover in advance of the imminent bombing. 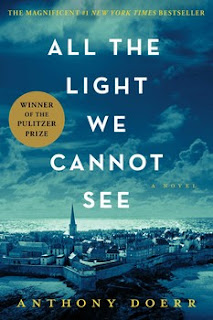 The story then begins to jump back and forth in time as we learn what has brought these two young people to this place and where they will go from here. Mr. Doerr’s nuanced approach concentrates on the choices his characters make as their paths converge.
The heroine is Marie-Laure LeBlanc, whose loving father, a talented locksmith, goes to extraordinary lengths to help her compensate for the loss of her eyesight. Marie-Laure’s father oversees all the locks at the Museum of Natural History in Paris. After his daughter is blinded by cataracts at the age of 6, he devises tiny, intricate models of the places she must go, so that she learns to navigate by touch and then by memory.
Marie-Laure grows up beloved and fortunate; Werner’s life is more grim. Consigned to an orphanage Werner truly seems to have no future beyond the coal mines which claimed his father’s life. An extraordinary talent for circuitry eventually gains him entrance to an elite Nazi school with an emphasis on extreme military training. Werner’s school brutally tests his decency and when he lets himself be seduced by the power newly bestowed upon him, he does nothing to stop the system that elevates him from destroying his best friend.
When the Nazis arrive in Paris, Marie and her father flee to his uncle’s house in Saint-Malo. Months go by. Werner moves closer to the front seeking out radio transmissions from the resistance. Life in Saint-Malo becomes increasingly difficult as the Germans take full control.
Doerr is a master of the metaphor and the novel is rich in description. But even with the literary and lyrical quality of the writing the book is extremely readable. The short chapters give the story a sense of urgency and suspense as the threads are brought together. In an interview Doerr states, “This was a gesture of friendliness, maybe. It’s like I’m saying to the reader, ‘I know this is going to be more lyrical than maybe 70 percent of American readers want to see, but here’s a bunch of white space for you to recover from that lyricism.’ ”
7 comments: