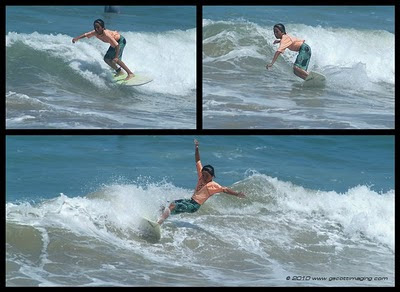 Devin De La Garza is a member of the On the Beach Surf team and is headed to Florida next week to compete in the surfing finals.

I met Devin's dad shortly after we opened and have since become acquainted with his mother and Devin. This is a super family and Devin is an awesome kid.

While he has been on a surfboard since he was three years old, Devin does well in school, participates in several other sports, plays tennis at a competitive level and most of all is an incredibly polite and well-spoken young man. Of course, maybe what I like most about the DeLa Garza family is that they are all avid readers.

Anyway, when Devin came by yesterday with copies of this poster by gscottimaging.com, which he was selling to raise money for the trip to Florida, I was only too happy to help - and was pleased that he included Paragraphs in his efforts.

As a Colorado, mountain girl I don't know any of the surfing lingo so the best I can do is say - Good Luck, Devin and most of all have a great time. We are lucky to have such a fine young man representating the Rio Grande Valley.