Allison is a Green Sea Turtle living at Sea Turtle Inc. on South Padre Island. Greens are endangered. They are considered to be the second-largest and longest-lived of the sea turtle species. Allison was found on the beach at South Padre Island on June 16, 2005, one of 73 sea turtles that became stranded that year. 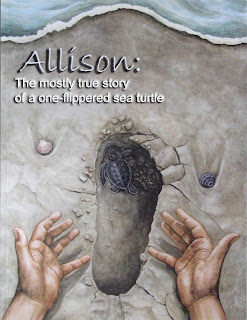 She was missing three flippers, an injury that is thought to have occurred from a shark encounter. Weighing a mere .73kg (1.6 lbs), she was taken to Sea Turtle Rescue for evaluation and medical care. Her story of survival and rehabilitation is chronicled in this new book "Allison: The Mostly True Story of a One-Flippered Sea Turtle" by David Cromwell. Combining fiction with the true rescue of Allison, this book is an entertaining and educational work that appeals to all ages.

We are really excited to be able to announce that Allison will join us on the courtyard at Paragraphs along with David and several of the knowledgeable and hard-working Sea Turtle Inc. volunteers or employees who work to protect and save these incredible creatures. While Allison is not able to autograph her biography, missing her flippers and all, David will be happy to oblige.

Cromwell likes to brag about having three careers where he couldn’t wait to get to work in the morning. First 22 years in television and news production, second as Media Service Director with the Sacramento Police Department and third rescuing turtles. David currently lives in Brownsville, Texas with his wife, Riley

I remember when David was working on this book. He put his heart and soul into every page. A true conservationist, with a love of the sea and it’s creatures.