"I Have Always Been Here" resists the lie that Chican@ language, culture, and people are somehow foreign to the American experience, for Chican@ ancestry is as much Native American -indigenous to the U.S. Southwest - as it is now European and African. A Chican@ Beat poet from the Rio Grande Valley of deep South Texas, Carmona explores his own discovery of this truth in this, his second poetry collection, written in a natural, engaging style.

This book is a mixture of poetry/flash memoir and stories that tell the journey of a poet from growing up in the border community of the Rio Grande Valley of South Texas to becoming socially and politically aware, and finally to today’s politically/racially charged world.  Weaving together beat, Chicano, and Native poetics, this book serves as a bridge between these seemingly different identities.  This book challenges the idea that Chican@s are immigrants to this land when most of them have had the empires change around them but we have never left. 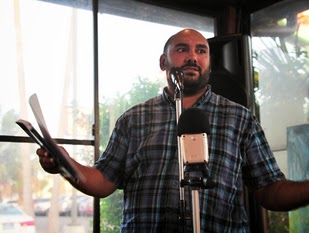 Christopher Carmona is a Chican@ Beat poet. He was a nominee for the Alfredo Cisneros de Miral Foundation Award for Writers in 2011 and a Pushcart Prize nominee in 2013. He has been published in numerous journals and magazines. His first collection of poetry called beat was published by Slough Press and his second book, I Have Always Been Here is published by Otras Voces Press. Currently he is the organizer of the Annual Beat Poetry and Arts Festival and the coordinator of the Writers Live Series at the University of Texas at Brownsville.

This event is free and open to the public.
Paragraphs On Padre Boulevard  5505 Padre Blvd. South Padre Island, TX
For information call us at 956-433-5057

This is awesome apps. It is proved!. Before getting this app I could mistake huge in my office task while I am writing in English. But Now I write well in English and never mistake also building better English skill. you could try here to get something that you are looking in kind can get here.

I was looking for getting the best grammar checker software. A week ago I get this software and star to use in working time. The results really surprising. My boss now happy with me of my error-free conversation. more info here to get a good writing service for your next task.

To admit in preferred program in University personal statement should be catchy to the selectors. For this thing I am looking for this service. It's think to me very vivid to enroll in my program. more to get the best results of information that you are looking for.

That i needed finding the perfect grammar checker software programs. A week ago That i understand this software programs together with super star to apply during being employed point in time. The https://www.paraphrasegenerator.com/our-paraphrase-services/essay-paraphrase-generator/ actual outcome extremely incredible.

That we necessary choosing the best syntax checker applications. Yesterday That we understand why applications along with very superstar to utilize in the course of being employed stage. More idea visit here https://www.paraphrasingservice.info/plagiarism-statistics/.