On the Shelf at Paragraphs – Armada

In 2011 Ernest Cline penned his wildly original, genre-busting debut novel, “Ready Player One.” Packed with irresistible ’80s nostalgia the novel was immediately embraced by geeks, bloggers, gamers, and readers everywhere. The novel received rave reviews across the board, has sold over a half million copies in the U.S., and is now set to be made into a film by legendary director Steven Spielberg. Fans were enthusiastic as they waited for the release of his second book.

Zack Lightman has spent his life dreaming. Dreaming that the real world could be a little more like the countless science-fiction books, movies, and videogames he’s spent his life consuming. Dreaming that one day, some fantastic, world-altering event will shatter the monotony of his humdrum existence and whisk him off on some grand space-faring adventure. But hey, there’s nothing wrong with a little escapism, right? After all, Zack tells himself, he knows the difference between fantasy and reality. He knows that here in the real world, aimless teenage gamers with anger issues don’t get chosen to save the universe. Or do they? 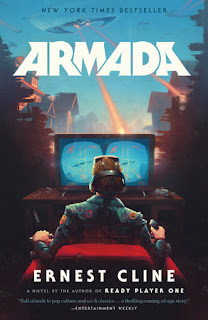 One morning when Zach is absently gazing out the window during a totally boring math class, he sees the flying saucer. Even stranger, the alien ship he’s staring at is straight out of the videogame he plays every night, a hugely popular online flight simulator called Armada—in which gamers just happen to be protecting the earth from alien invaders.

No, Zack hasn’t lost his mind. As impossible as it seems, what he’s seeing is all too real. And his skills—as well as those of millions of gamers across the world—are going to be needed to save the earth from what’s about to befall it. It’s Zack’s chance, at last, to play the hero. But even through the terror and exhilaration, he can’t help thinking back to all those science-fiction stories he grew up with, and wondering: Doesn’t something about this scenario seem a little…familiar?

The themes in “Armada” are familiar. “It depends on how deep your knowledge of the ‘80s and geek culture goes,” Cline explains. “If you’re a literary person, you’re going to say that it’s like Ender’s Game. If your thing is the movies, it comes from that genre in the ‘80s when kids could do anything. They can find the treasure map and save their town, or their dad gets shot down in some far-off country and they can steal an F-16 to get their dad back. When people read Armada they’ll eventually realize, ‘Hey, Ernie isn’t ripping off The Last Starfighter. He’s ripping off Iron Eagle.’ It’s all around this idea of an absent father and the kid coming to rescue his father and even replace him in some way. It’s one of the big themes of Star Wars and Joseph Campbell’s mythology and Armada, too.” 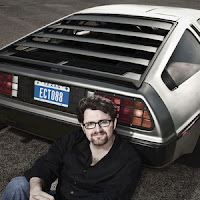 Armada is a fun and surprising thriller, a classic coming of age adventure, and an alien invasion tale like nothing you’ve ever read before.

Ernie lives in Austin, Texas, with his family, a time-traveling DeLorean, and a large collection of classic videogames

The shelf of the paragraphs is waiting for you here with the nice deal. You can see the picture of the Armada here. Just catch the deal of the fun here. You can also find the link of http://www.sentencechecker.org/irony-in-a-sentence-4-examples-you-can-learn-from/ with this area of the fun zone.

Battling and manhandling exercises among the understudies ought to be dealt with well by their instructor to keep climate of class https://www.onlineproofreadingservices.net/summary-generator/ great. In the event that an instructor can't deal with such battling and manhandling exercises in the class, he ought to leave to instruct that specific class.

Right, various keen understudies really flop genuinely in the school since they trust their insight and don't lock in thusly click here now kind of thinking drives them to the mistake which isn't helpful for their future.