A Great Read to Listen to

I love audio books. I listen to them whenever possible - walking the dogs, working outside, driving, actually, I am listening to a book whenever I can't sit down and read. I must admit, most of the time I find this a good way to catch up on classics that are in the public domain and available at Librivox. What is better than getting a classic story read to you, for free? These volunteer narrators are quite good.

But, I am always surprised when I listen to a professionally produced audio book. Right now I am listening to "The Graveyard Book" by Neil Gaiman and read by the author. This had been on my TBR pile for ages but I just couldn't sit down to it. After hearing the audio version recommended by Michael and Ann, at Books On The Nightstand I have been waiting for it to become available at the Denver Public Library, but I finally decided to splurge and download a copy from Audible.

I have not been disappointed. Everyone knows Gaiman can write a great story but he is also a wonderful storyteller. I have been drawn into the story in a way I don't think I would have been by reading the book.

Nobody Owens, known to his friends as Bod, is a normal boy. He would be completely normal if he didn't live in a sprawling graveyard, being raised and educated by ghosts, with a solitary guardian who belongs to neither the world of the living nor of the dead. 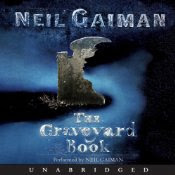 There are dangers and adventures in the graveyard for a boy. But if Bod leaves the graveyard, then he will come under attack from the man Jack - who has already killed Bod's family.

Beloved master storyteller Neil Gaiman returns with a luminous new novel for the audience that embraced his New York Times best-selling modern classic Coraline. Magical, terrifying, and filled with breathtaking adventures, The Graveyard Book is sure to enthrall readers of all ages.

This is a young adult novel that can be enjoyed by kids of all ages. A little scary in places for sensitive readers -- it is Neil Gaiman, after all -- but generally a tale to keep your interest. You can purchase the book for download here.